For Rodeo Drive, curator and writer Neville Wakefield caught up by phone with photographer Anthony Hernandez in isolation in Fairfield, a remote town in the middle of the prairie in Idaho, to talk about his revelatory Rodeo Drive 1984 photographs, and what caught his eye.

While Rodeo Drive is temporarily closed in order to keep our community and visitors safe at this time, we invite you to stay connected and enjoy this conversation and special exhibition of timeless photographs of Rodeo Drive. 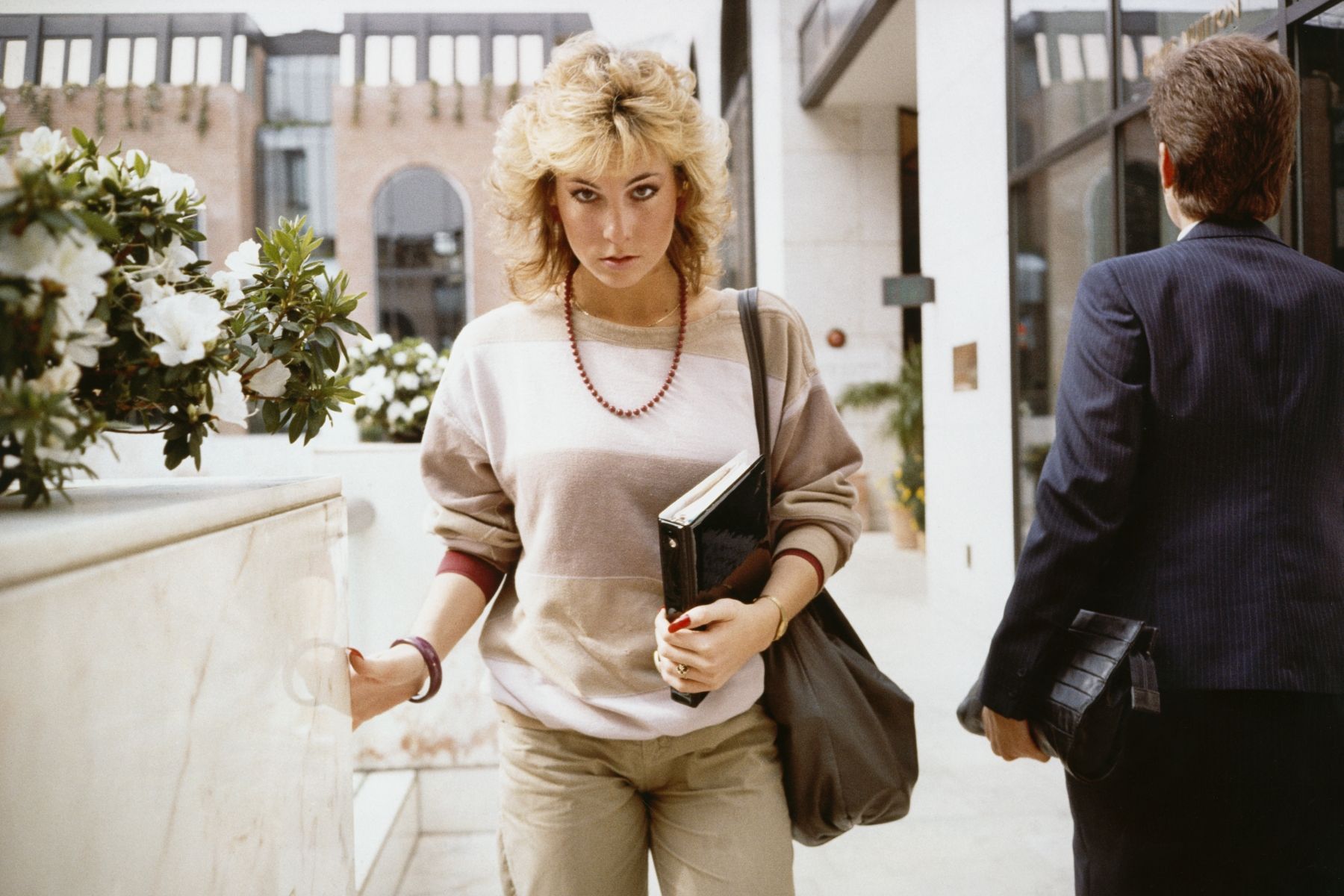 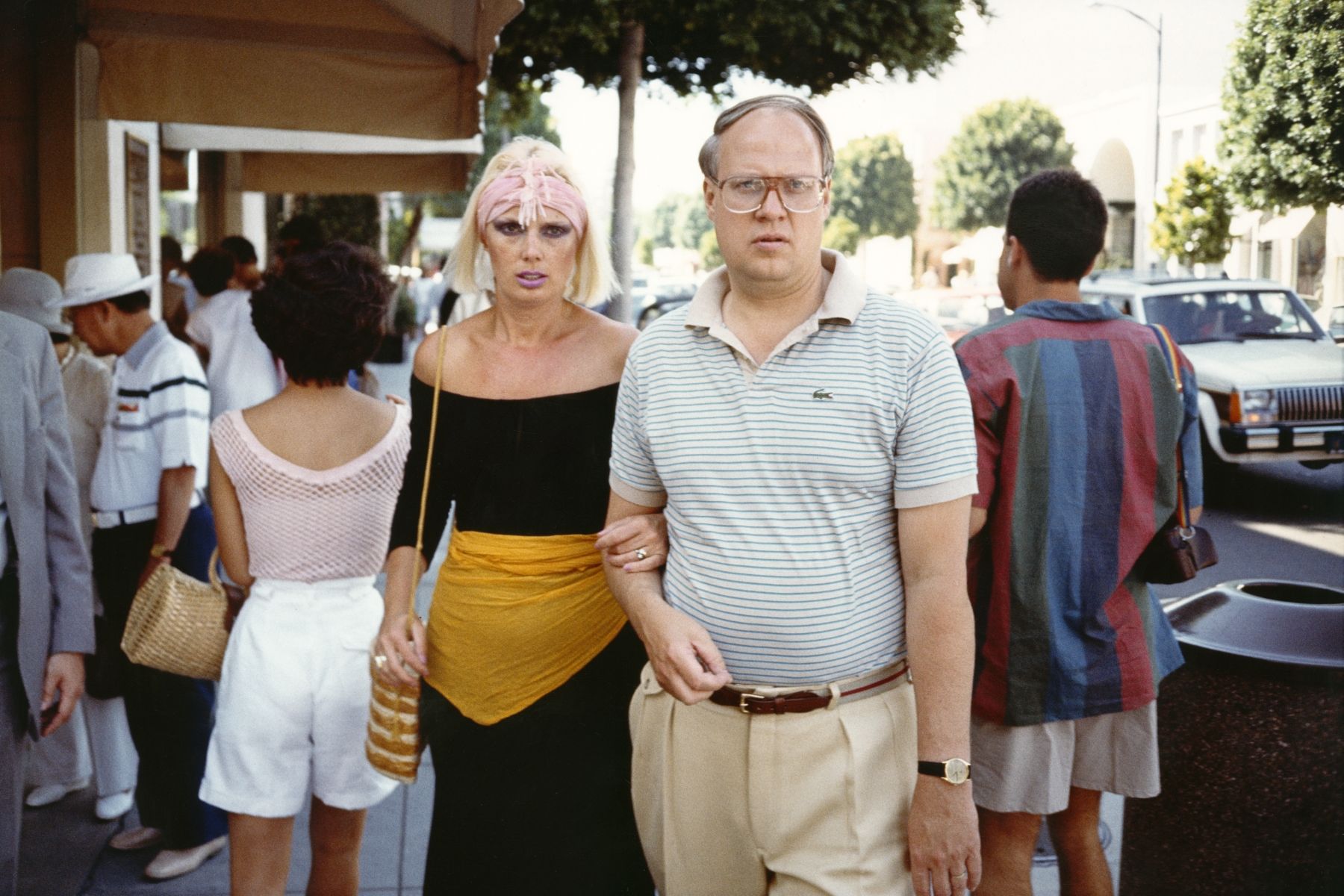 Neville: How did Rodeo Drive enter your life? Or rather, how did you enter Rodeo Drive?

Anthony: It was all really an accident. It was 1983 I believe. There was a magazine that was going to publish an issue with photographers from L.A; Robert Heinecken, John Divola, and others. At that time, I didn’t have a gallery but Robert (Heinecken) told the magazine they had to get a hold of me. The art director called and I showed him my black and white photographs. He said he’d like to run some of them and would pay me for the work. It was great, as I was struggling. Later he called to say he was sorry but the head editor didn’t want to run my photographs after all. I think in hindsight they thought the pictures were kind of depressing –  poor people, waiting for the bus in black and white in L.A.! The art director felt bad about the decision and offered to help me get some other commercial work. It seemed a great opportunity to make some money. I’d make color pictures and keep them separate from my black and white work. That’s what I thought, but I  wasn’t very successful. 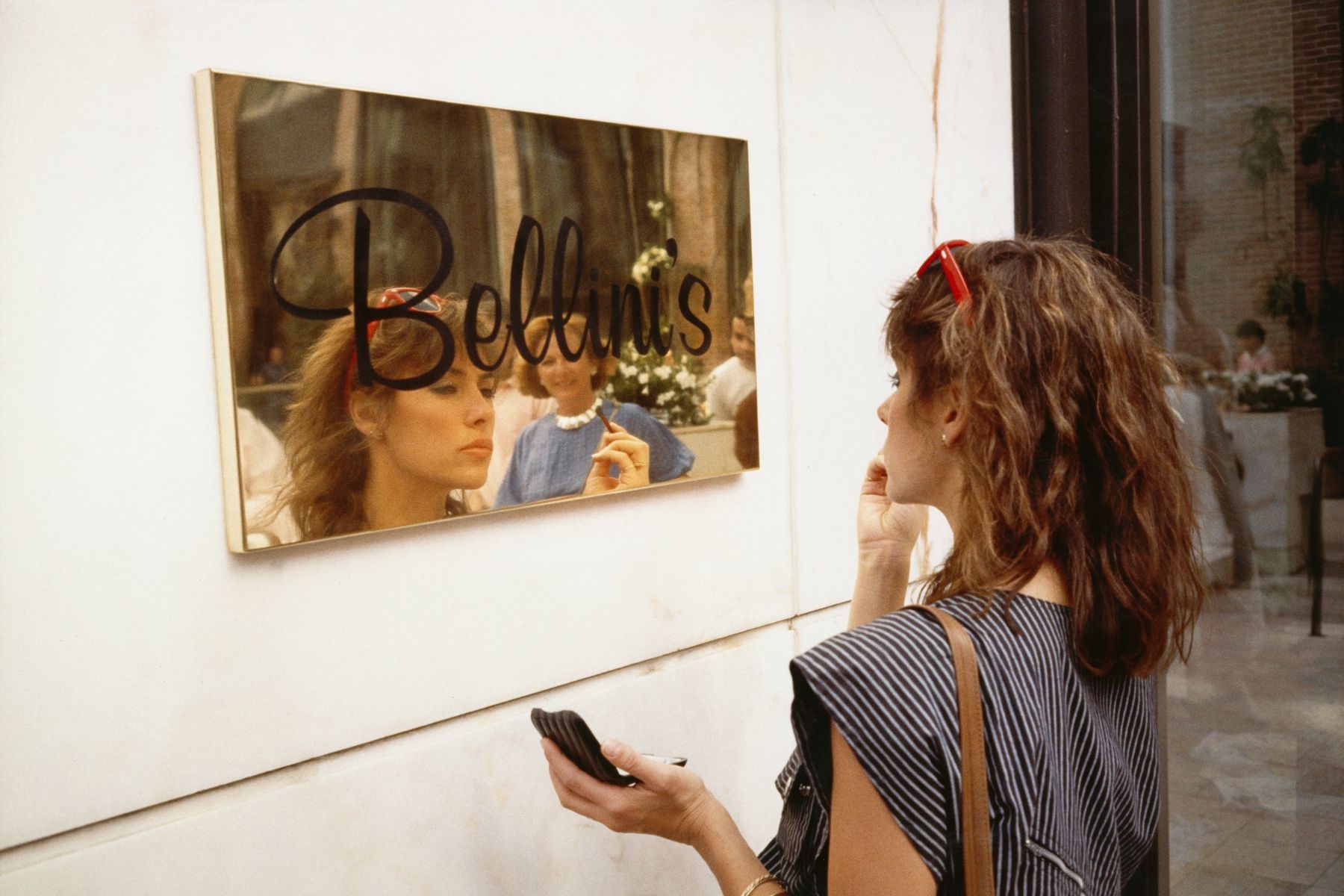 Neville: Why weren’t you successful?

Anthony: They just weren’t working as pictures, so I decided I’d go to Rodeo Drive in Beverly Hills, somewhere different, where I’d never photographed before. I made the first “successful” picture (#21) of that very famous little cafe, I was so excited, I just thought, “wow, this is great!” So I started making more pictures and never thought again about the magazine. It was the first group of color photographs of people. 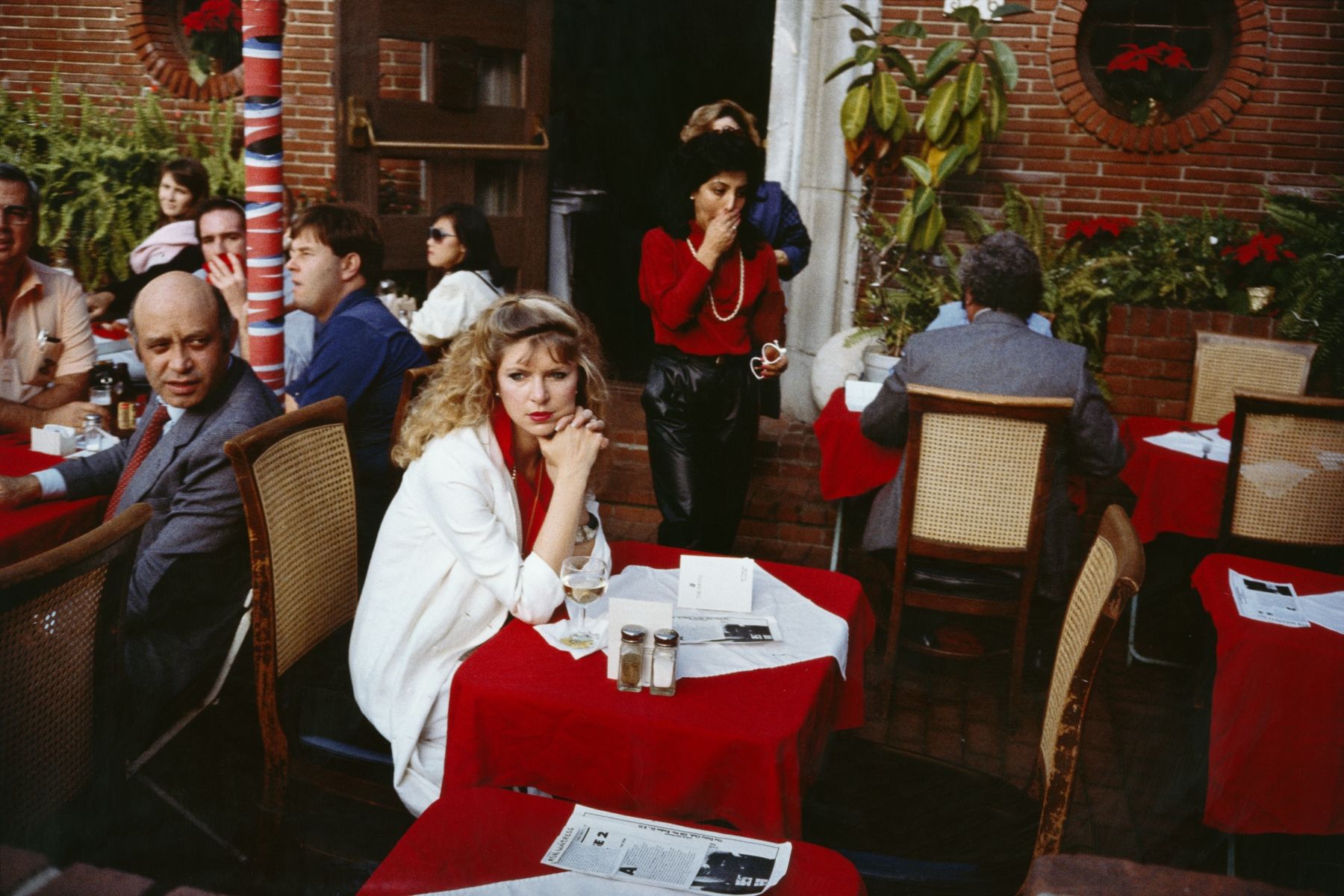 Neville: You were there on Rodeo Drive, but also seemingly invisible – did you consider yourself a  street photographer?

Anthony: When I started in 1969 in downtown L.A., I didn’t really know a thing about the history of photography. But as a kid. I really enjoyed walking from downtown L.A. to where we lived in Boyle Heights.  I’d walk in different directions, taking different routes. I was just walking and looking and then later, when I  picked up a camera, it made sense that I was still walking, but with a purpose. Later, I got to know photographers looking at books and I met Lee Friedlander among others, I didn’t really go to school or think that I was going to be a photographer or an artist– that wasn’t in my background. It was an accident.

Rodeo Drive started because it was color. All of the pictures of Rodeo Drive are slightly overexposed. I shot with transparency film then because you’d get your film back and you could see immediately that one was overexposed or underexposed. I like the look and feel of this kind of “hot picture in the spotlight” so I  decided I’d slightly overexpose my film. I was shooting very quickly and it was even harder shooting in color than in black and white. So Rodeo Drive was more intense, but at the same time, more exciting. I called it a  dance.

In all the Rodeo Drive pictures, I’m actually walking, and in the case of the person who is sitting at the table in the restaurant, I’m walking past with my camera coming up to my eye, turning, shooting and then moving.  The camera’s always wrapped up in my hand as I’m walking. If I see something, I’ll turn and shoot.  Obviously, you’d have to pre-fix the focus and you didn’t know until you got your film back if you’d got that shot in the zone of focus. I like that way of working quickly as a street photographer, even Garry Winogrand says he was always dancing.

I was always trying to concentrate on something that’s very, very specific, the light, the people, and I was always trying to be invisible. Some of my favorite Rodeo Drive pictures are those in which the people aren’t aware that they’re having their photograph taken, even though I’m really close to them, And to flip it the other way there are the people knowing that I’m taking a picture of them right then. I like both scenarios.

Many years later Joshua Chuang, a curator at Yale, saw the pictures and put me in touch with Michael Mack at  Mack Books in London, who said, “let’s do a book!”. Ralph Rugoff wrote the introduction and it got a lot of attention – it was a big deal then, but not in 1984. 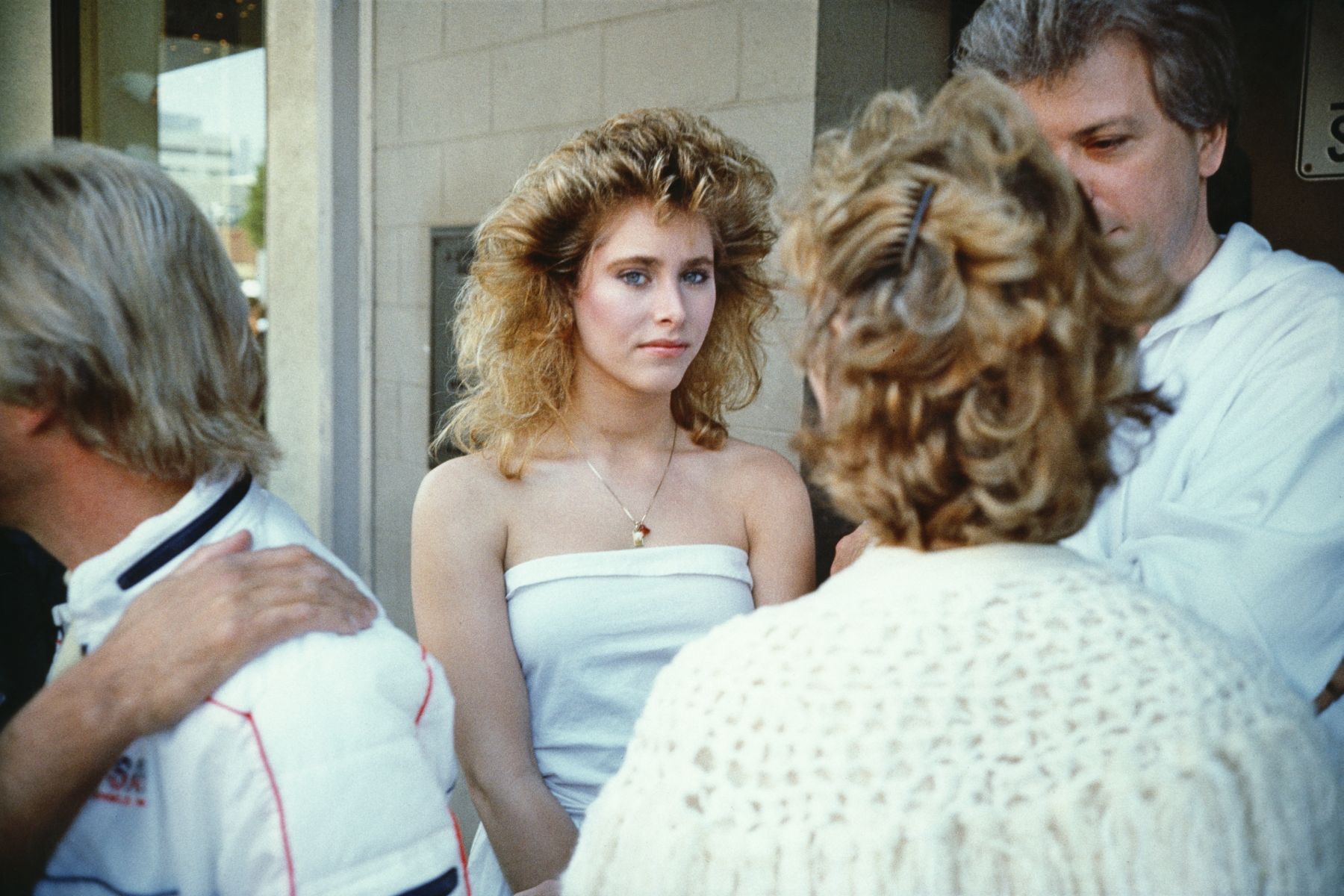 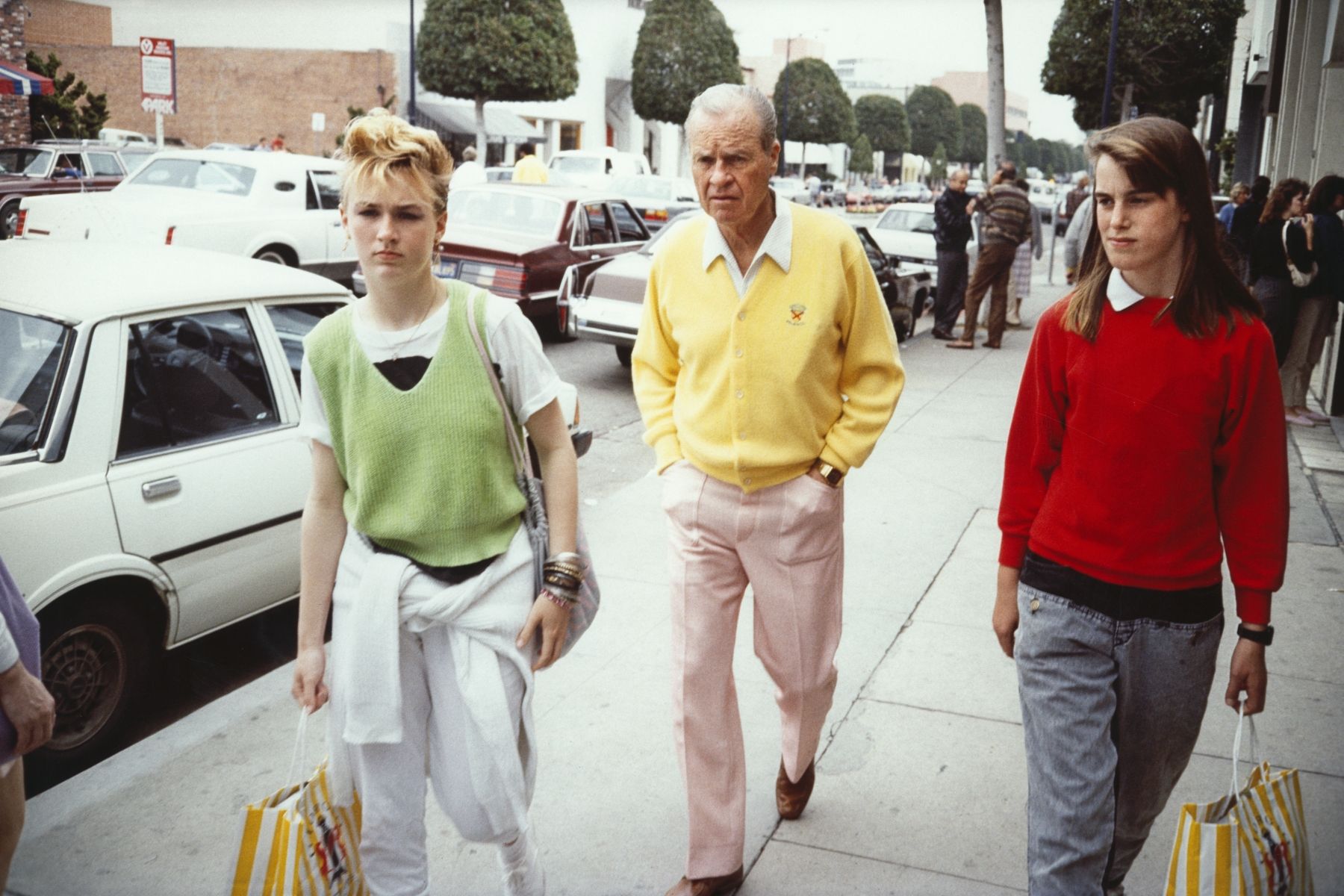 Neville: I’m intrigued about the idea of blending into the mobility of the street but also ending up with these photographs that appear to be incredibly decisive and composed. How did you achieve that or did you just shoot a lot of films?

Anthony: No, I didn’t because I had very little money. So if I shot one roll a day on Rodeo Drive. that was a  lot. I was very, very careful. You put your camera up to your eye, thinking you’re going to make a picture, but at the last second, you don’t have to take a picture. You also can’t think about what you’re looking at – you’re actually seeing things, patterns coming towards you and there’s no time to think about it, you’re just capturing it, and that’s the choreography, and the dance – this idea of constant movement. 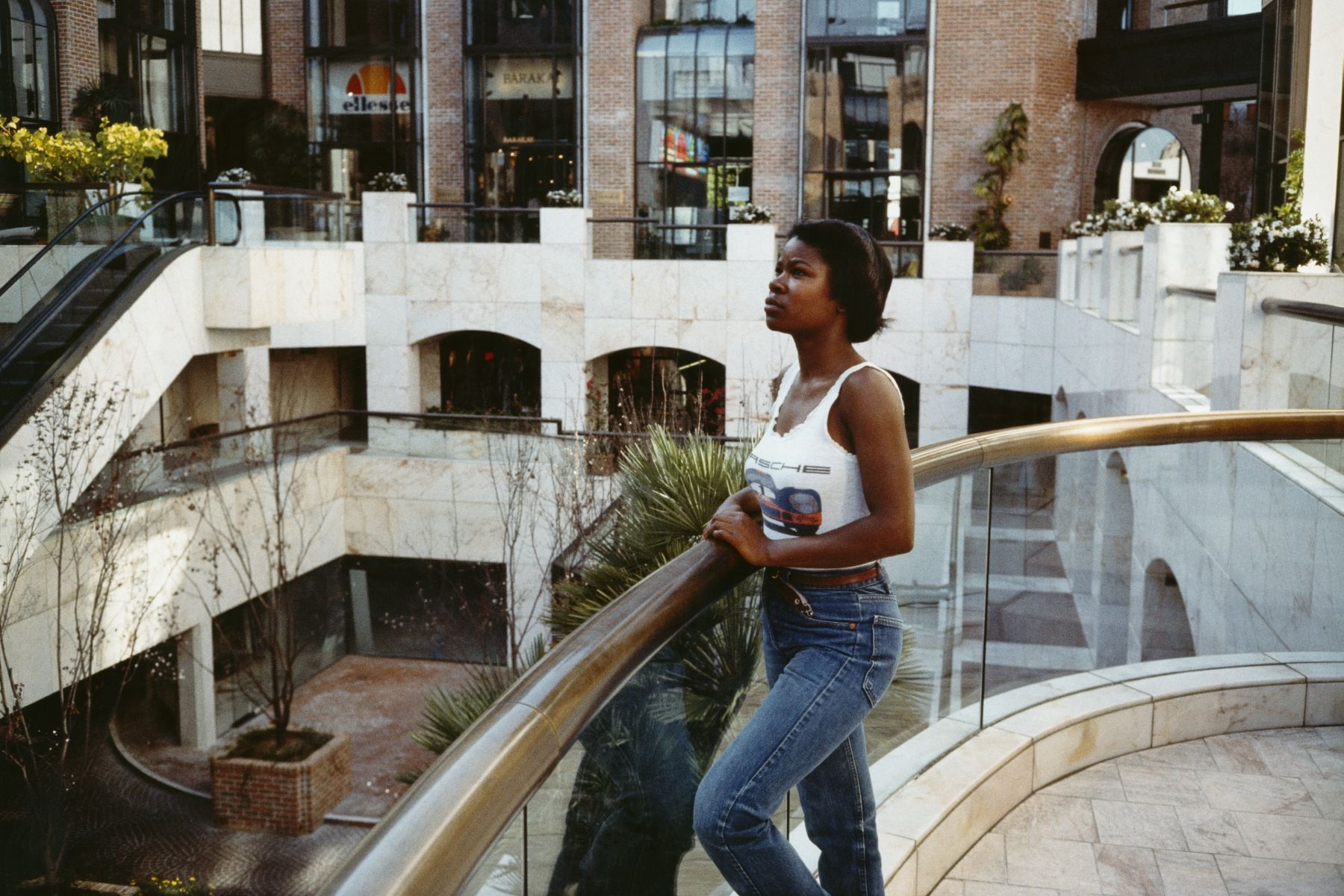 Neville: The color of Rodeo Drive and everything about that environment is very different to downtown L.A. or your earlier work- it must have been a very alien landscape for you?

Anthony: Rodeo Drive was very, very nice because if I took a break I’d go and have a coffee at a very nice little place and sit outside. I would take a break and have a cup of coffee in downtown L.A too, but it was different, it was a lot harder – you know, tough, bleak surfaces, and Rodeo Drive is sometimes quite beautiful, the light and just the atmosphere is completely different. So I enjoyed that. I’d bump into Gary (Winogrand) and he’d say, ‘OK, we’ll meet later and have coffee’. And that’s what we did.

Neville: LA is a city of extremes that combines the utopic and the dystopic. I see in your work a  complete range of social issues from the homeless to Rodeo Drive, Have these kinds of dichotomies always been a driving factor in your work and when you first went to Rodeo Drive, was that something that you were aware of and thinking about?

Anthony: Well, yes, from the gritty streets of downtown L.A to Beverly Hills where I had never hung out before, and then from black and white to color – it was very new to me and I liked it. 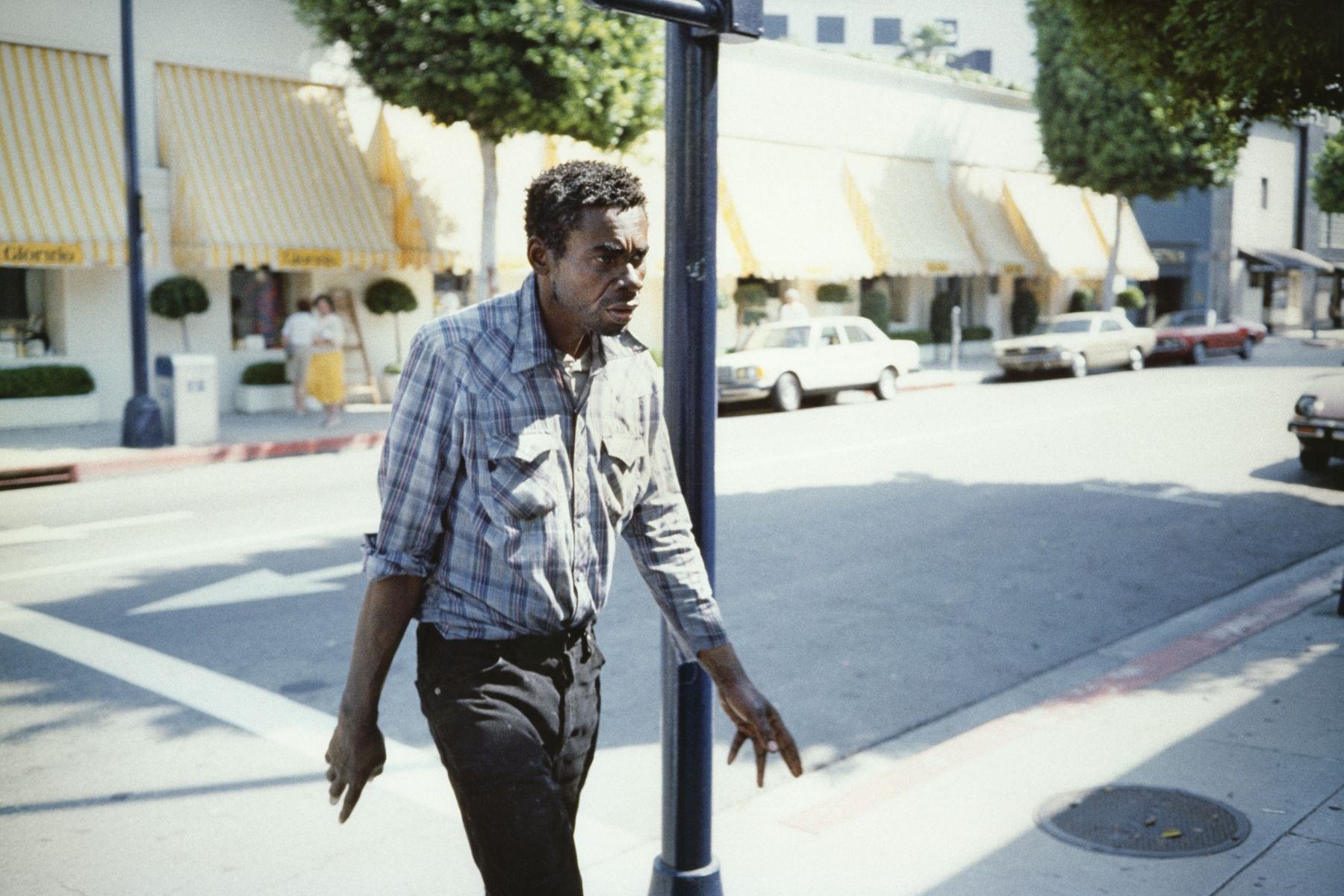 Neville: There’s almost an air of homelessness to some of these international shoppers – perhaps not homelessness, but certainly, they look like people waiting for something. I was interested to see that you chose to capture these moments, rather than a celebration of consumer culture that we associate with this sort of consumer mecca…

Anthony: There is one picture of a homeless person in Rodeo Drive. It’s a fascinating picture because I didn’t see that man, rather I heard him. I was going in a different direction to cross the street and I heard this sound,  this voice. As I turned, I brought my camera up turning and shot. To me, that was the most incredible picture, but it’s tough – he didn’t even have shoes on. 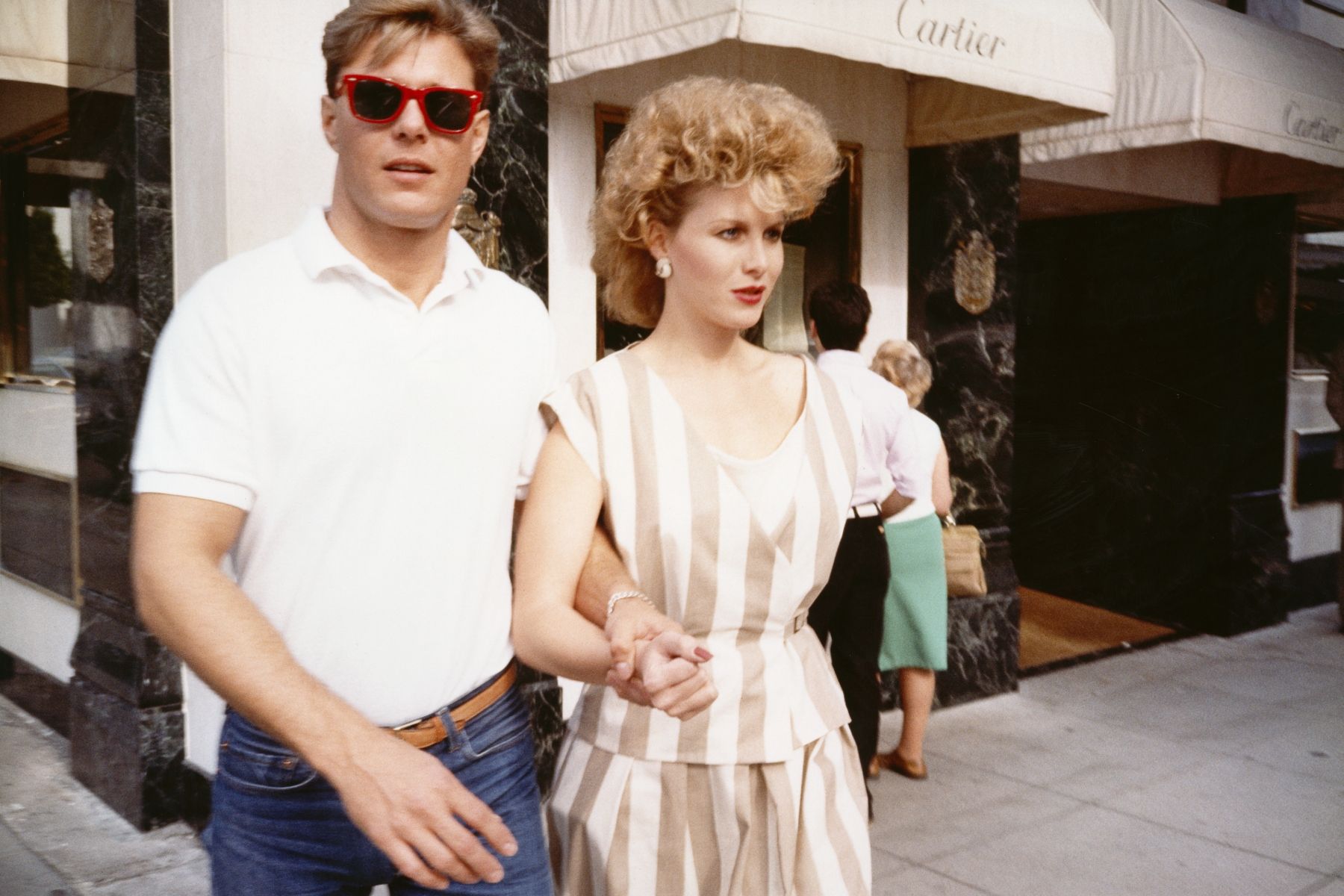 Neville: There’s a social anxiety, but also a sort of existential anxiety in many of the pictures as if perhaps the search for whatever we search for when we do these kinds of things has a sense of futility to it?

Anthony: In one of my favorite pictures (#7), there’s a couple. He’s got her arm. She only has one arm. The reason that picture is so special to me is because I could see this couple down the street and I had to change a  roll of film – it’s not that easy, and as I’m doing it, I’m not looking, and I’m coming and they’re coming, and just as I’m getting my film rolled up, I’m stepping backwards, falling backwards, taking that picture. It was amazing. It’s the only way I could take the picture, because there was no space. I’m not even aware of where my eye is going to focus, I just fell backwards. That’s why the guy’s looking at me. 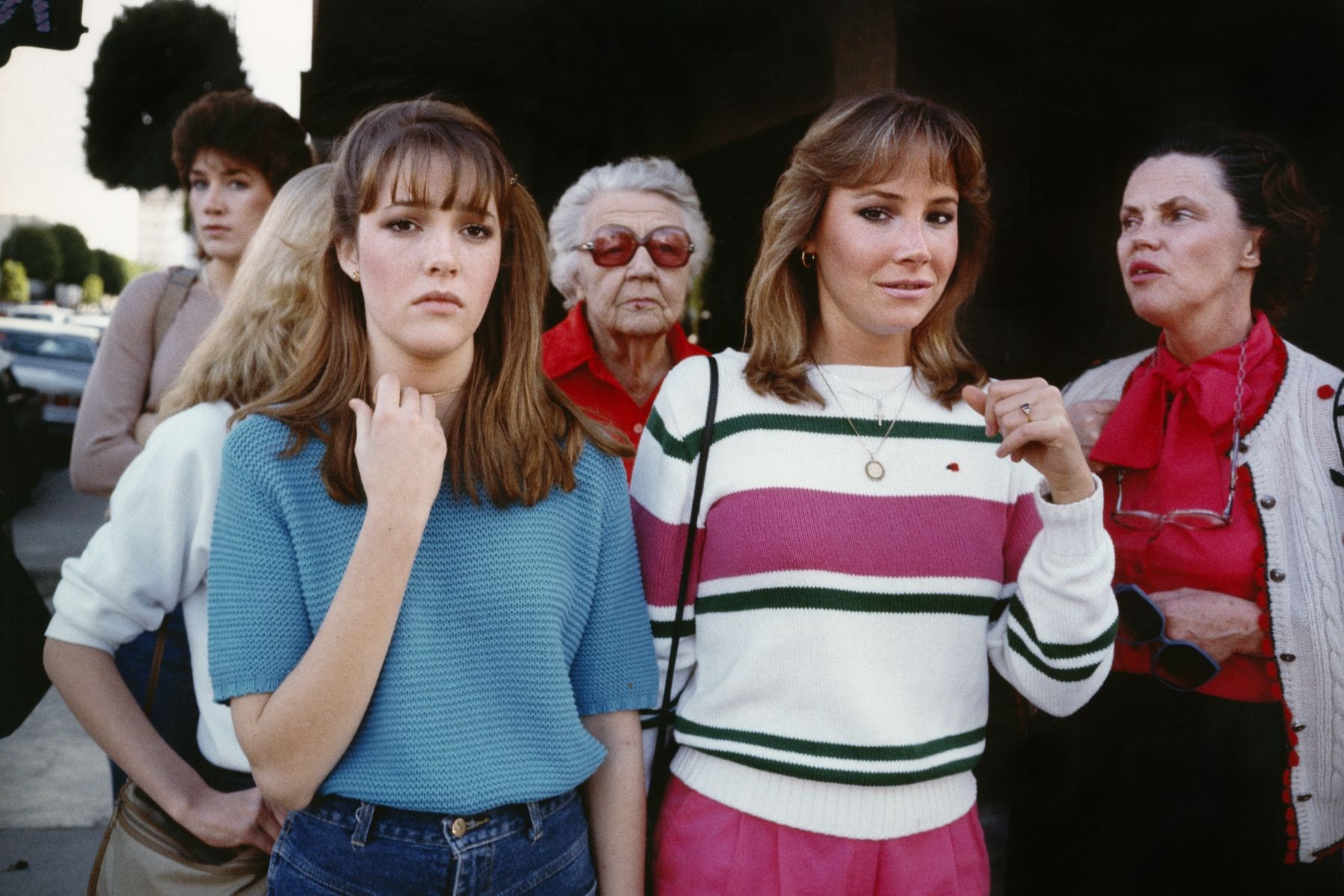 Picture (#10) is very special because I usually photograph people coming toward me. Here I’m waiting to  cross the street. Everybody’s waiting for the signal to change. As I turn around, I see this whole family, and I  take that picture so quickly. If I hadn’t turned around, I’d never have imagined that, because I’m always  looking at what’s in front of me. And there’s a kind of socially visceral aspect to the young girl with her hand held up to her neck.

Neville: In the eighties, Rodeo Drive had become a coveted hot spot for fashion and style – how much was an interest in fashion a driving force in your work?

Anthony: I don’t think I was thinking about it, except for a girl, in a very beautiful dress that she designed for herself. At that split moment when I was photographing her, it wasn’t just her dress, it’s the patterns, a clown on the right, but also her glasses, all these circles everywhere. This is an example of something catching my eye so quickly that I immediately took the picture. There are some women that wore these outrageous outfits, but I wasn’t thinking I had to make certain kinds of pictures because of certain kinds of fashion. 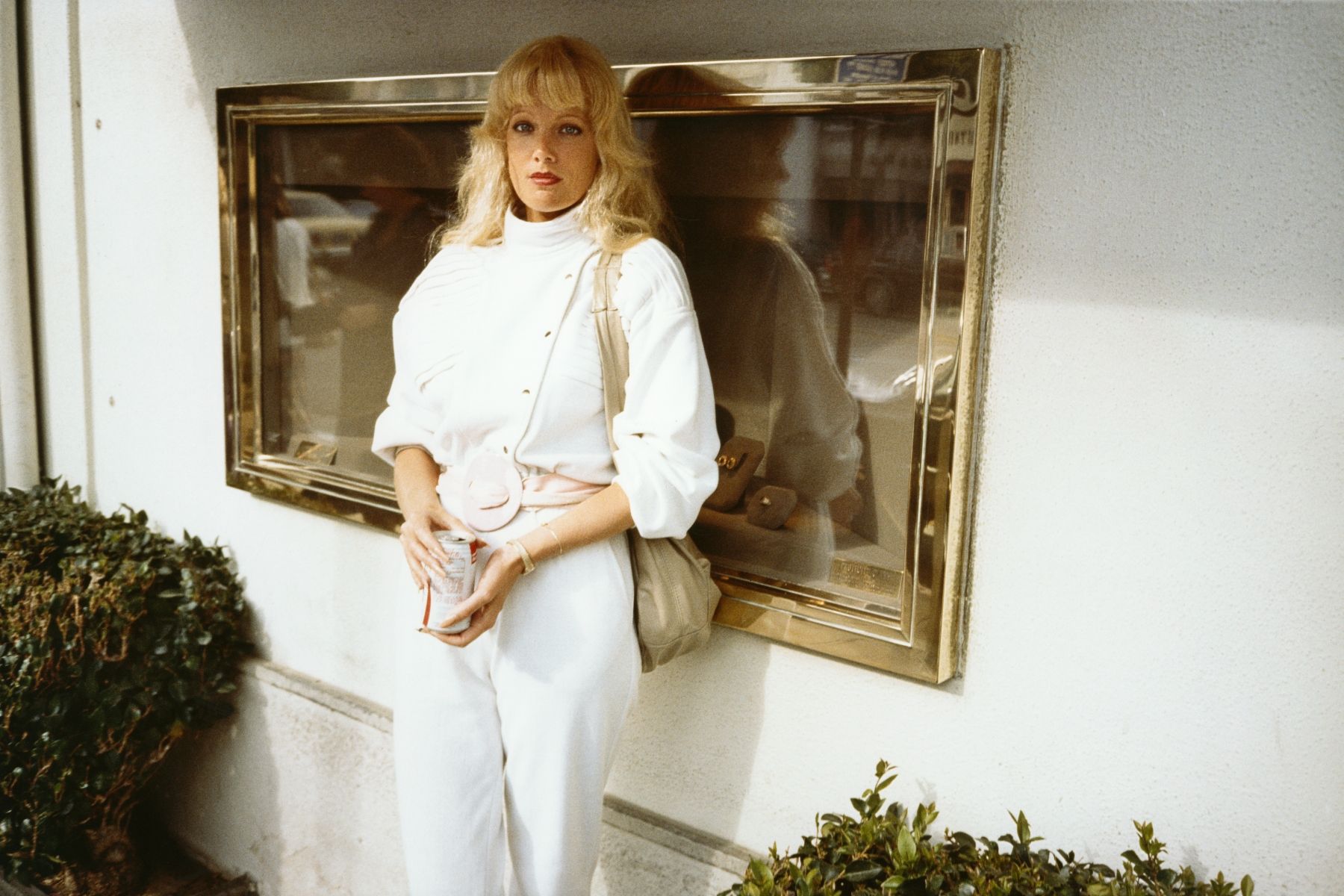 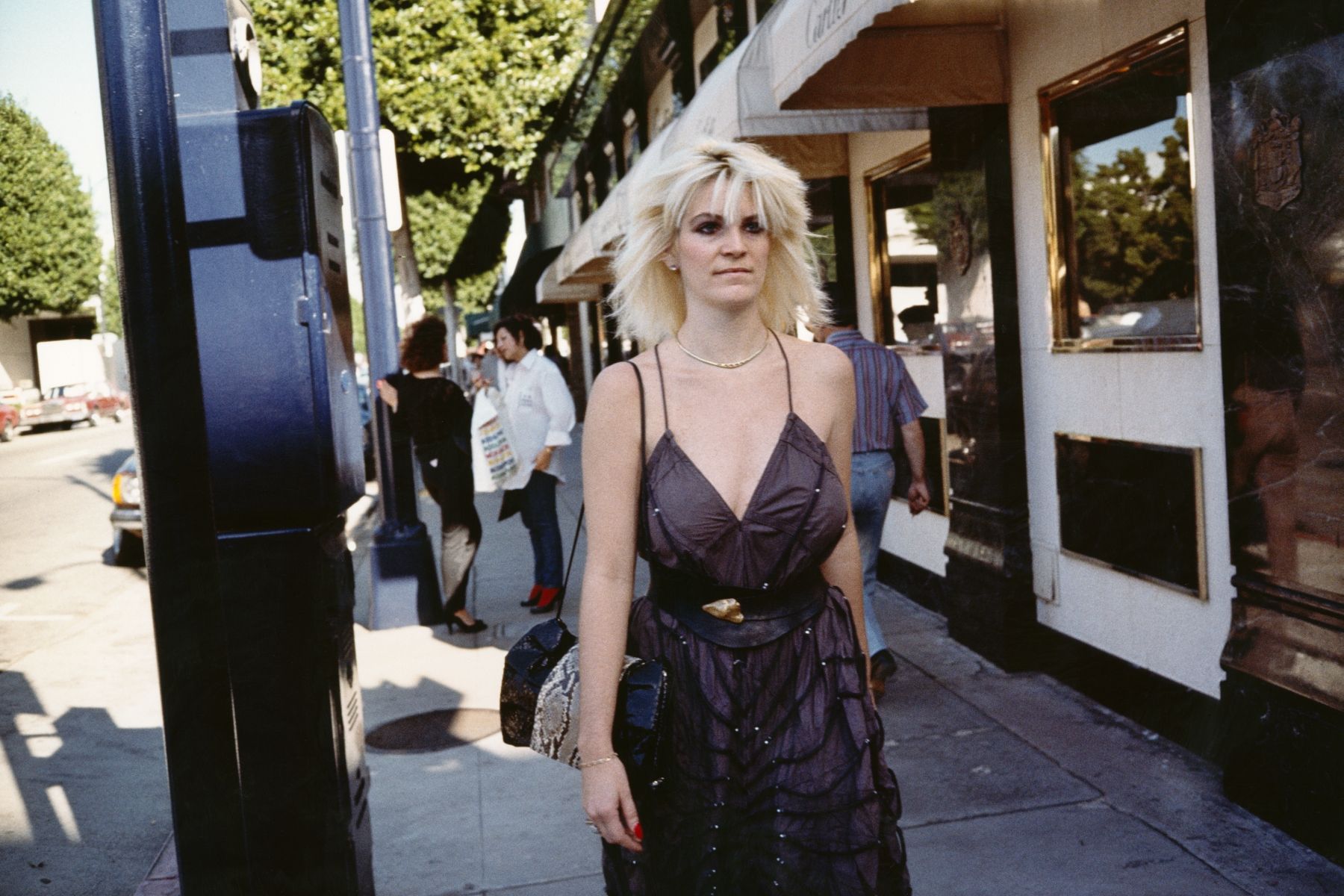 Neville: I’m curious about how the Rodeo Drive pictures read as a historical, social and architectural document and how different the vibe of Rodeo Drive in 1984 was compared to what it was, at least prior to COVID-19. Would you be interested in returning to this landscape?

Anthony: Well, I don’t even have a 35-millimeter camera in my life. I sold it. I’d have to figure it out or use a  digital camera. If I were to photograph on Rodeo Drive today, people might say, “Take a picture of me!”  There’d be more and more pictures. Back then the way I photographed was so fast. There wasn’t enough time for somebody to ask if I had taken their picture. I was already past them walking down the street. I think now with cell phones, people are taking pictures constantly, everywhere – it’s a common currency. With digital cameras you can take photographs that you couldn’t before, and if you wanted to photograph Rodeo Drive now in the way I was photographing then, everybody would be in focus.