Lawrence Weschler, author of Seeing is Forgetting the Name of the Thing One Sees: Over Thirty Years of Conversations with Robert Irwin, discusses the experience of viewing Robert Irwin's Scrim Veil—Black Rectangle—Natural Light, Whitney Museum of American Art, New York, 1977.

Scrim veil—Black rectangle—Natural light, Whitney Museum of American Art, New York (1977) by artist Robert Irwin was a large-scale installation that uniquely engaged the Whitney’s former location, the iconic Breuer building, and the natural light that emanated from the large window in the fourth floor gallery space. Part of the Whitney’s collection, the work was made specifically for the Museum’s fourth floor. Until 2013 when it was reinstalled, it had not been exhibited since its 1977 debut, a pivotal moment that would set the course for Irwin’s subsequent artistic practice.

"If art is about aesthetics and perception (seeing) and knowing in action... Can we continue the dialogue for art to be limited to the equal of making?"
- Robert Irwin 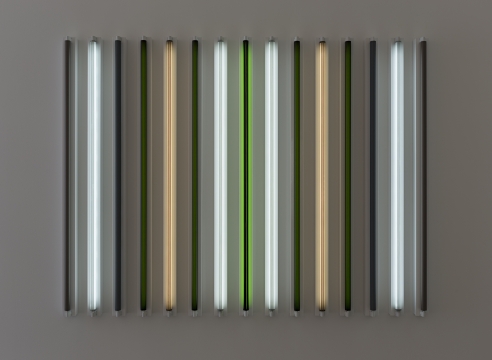